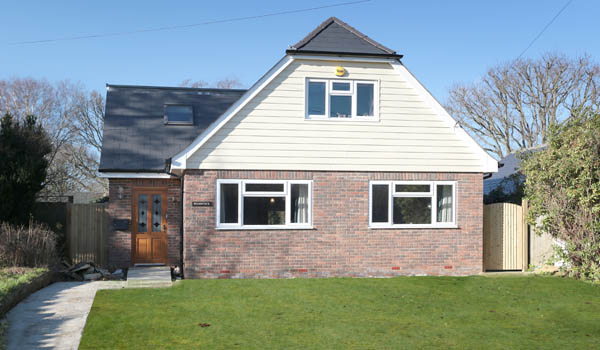 John wanted some additional living space for his growing daughter.  Having completely paid off the mortgage on his two-bedroomed single storey home in East Sussex, John did not anticipate there being any problem with raising finance when he decided to extend his house.

Disaster struck.  Three separate mortgage companies turned down his request for finance on the basis that the 1930s timber frame structure of the house could not be guaranteed to last for long enough to secure the loan.

“That was the worst possible news” reflects John.   “We discovered that our house was effectively worthless.  We couldn’t do the extension we needed and were also in the position that no-one would be able to raise finance to buy the house, so it would have been difficult to move either”.

John had never really considered building a home for himself, but it rapidly become obvious that this was the best option. Three years later the finished house is a delight, giving all the family what they wanted, although the journey was not always plain sailing as John explains.

What is your favourite bit of the new house?

The best thing about starting from scratch is that we could think about how we wanted the whole house to work – not just bolt on additional space to the original design.

I now have an office at home, my wife has the kitchen she has always secretly wanted and the rooms we have built into the roof space give my daughter all the space she needs.

We could also design-in some extras that we probably wouldn’t have considered otherwise.   For example, the whole house is wired with a high specification communications network throughout.

What was the biggest challenge?

Managing the money was the most difficult bit.  We got a self-build mortgage from the self build specialist  Build Store.   In order to work out how much we needed to borrow, we had to cost everything in at the start.  And those costs had to be right as negotiating for a higher loan later in the process would have been very difficult.

Our self-build mortgage released the money in stages.  You start off with a large initial payment (generally equivalent to what the land is worth) and get the rest as each stage is finished and signed off by the building inspector.

Cash flow is a challenge.  You need to really keep on top of everything.   The tranches of money come in from the mortgage company as each stage of the build is completed, so you need to do a bit of juggling between paying the builder for the work he has done and waiting for the latest inspection on the house to receive the next instalment of mortgage money.

How did you build the house?

Not surprisingly, I wanted to make quite sure that the structure would last several lifetimes, so I opted for a masonry build using H+H’s Thin Joint System.

I would always have opted for masonry, but went for thin joint because I wanted a really efficient home so used a lot of techniques from the Passivhaus building standard.

As well as good airtightness we also went for Triple Glazing and a mechanical ventilation and heat recovery system (MVHR).  The whole house has achieved an Energy Efficiency Rating B – at some stage in the future I would consider solar photovoltaics which would increase the energy efficiency to Band A.

We built cavity walls, fully filled with mineral wool insulation and then used a combination of brick and weatherboard on the outside to blend in with the local housing style.

Planning constraints meant that we had to stay largely within the original footprint of the house and a two-storey design would not have been allowed.   Working with the architect and completely redesigning the layout of the house we have hugely increased the living space downstairs and added three bedrooms into the roof.

Did you stay in budget?

Almost.  We ended up around 10% over budget with the overspends largely caused by issues we really couldn’t have anticipated.

At the end of the day we were able to completely re-build our home from scratch for £70k more than the estimate for the original plans for an extension.   We have all the benefits of high-quality modern building and materials and I think the economics of the project really make sense: in fact, we really should have considered this option at the outset.

Would you do it again?

I very much hope that I won’t have to!  But yes, I would.  It was certainly challenging, but the end of the process was really worth it.